An official website of the State of North Dakota

The State of North Dakota provides automatic translation for nd.gov websites, courtesy of Google Translate. Please remember, though, that the English language version is considered the most accurate. In the event of a disagreement or discrepancy between the translation and the original English version of this web site or any notice or disclaimer, the original version will prevail.

“Making Mistakes is How We Learn”: A Young Adult’s Journey to Independence 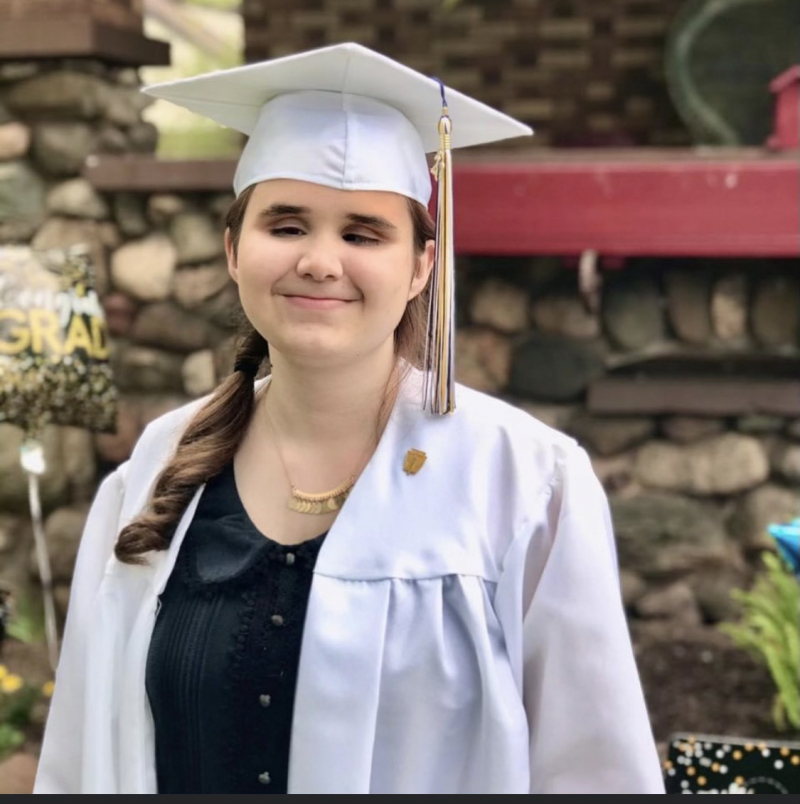 We periodically share a young adult's story of success. In this profile, Rowan Stomberg (they/them), who grew up attending short-term programs at NDVS/SB, reflects on the challenges they've faced as they've gotten older. These challenges, Rowan has discovered, have taught them so much and made them who they are -- someone who is now ready to face their future with excitement.

The “No Thank You Bite” was a very important rule in Rowan Stomberg’s home while growing up. “It was my dad’s rule, and it meant we had to at least try it,” whether it was a taste of mushrooms or a new sport, Rowan explains. “Then, if I didn’t like it, I could say that I at least tried it.” As they’ve gotten older, the No Thank You Bite has taken on higher stakes. It’s no longer just referring to new foods or new games. Over the last few years, Rowan has had a variety of life experiences – some that didn’t turn out as planned – but they are grateful for all the “no thank you bites” they’ve tasted. “Making mistakes is how we learn,” Rowan says.

Rowan, who spent her early years in northern Minnesota, was born with Leber’s congenital amaurosis, an eye disorder that primarily affects the retina. They grew up attending short-term programs across the Red River at North Dakota Vision Services/School for the Blind and loved every week they spent there. “Aside from all the blind skills that they were required to teach – the technology, the daily living skills, the cane skills – the other thing that they taught me was compassion and patience. I would make the same mistake 50 times, and they would say, ‘OK, try it again!’ and that was just really good for me,” they say. Rowan still keeps in touch with some of the other students they met there. “I’ll always have so many memories from Teen Week or Kids Week.”

Beginning in middle school, Rowan was homeschooled by her mother and stepfather in Michigan. By senior year, they were ready to try public school again, and while their teachers were “incredible, they really went above and beyond for me,” Rowan didn’t feel they got the support they needed from the special education department or the TVI that was assigned to them. And then in March, COVID hit. “It was really difficult to focus with everyone at home,” they said, and there was confusion on what needed to be done to graduate. But in the summer, Rowan walked across an outdoor stage to accept their diploma, and in August of 2020, they felt ready to begin their next chapter: college. Their mom drove them to college in Iowa, but it didn’t take them long to determine that “I wasn’t prepared,” Rowan realized. “And it wasn’t even homesickness; I got overwhelmed within the first few days. So I dropped out and deferred my enrollment until the next semester.”

When the next semester came around, Rowan decided to try again, but this time stay off-campus and attend virtual classes. This, too, was a wake-up call. “I didn’t have the proper training with technology,” Rowan realized. “And that started affecting me to the point where I’d have these breakdowns.” Not wanting to put their mental health at risk, Rowan dropped out of college again, and started doing their own research on employment opportunities that don’t require a college degree. But they don’t regret their time at college, even if it did “chew me up and spit me out,” Rowan said. Their no thank you bite of college set them on their next path, and Rowan is proud that they did try college. “I had my no thank you bite, and it’s not for me,” they explain.

Now that they’ve tasted college and know that it’s not for them, Rowan is looking forward to the next steps on their path to independence. And they’re excited to “become a real adult,” Rowan laughs. One goal is to obtain an interpreter certificate so they can work as a Spanish interpreter. Rowan has been studying Spanish since they were 11 or 12. “I got mad at my older sister who was taking Spanish in high school and showing off what she was learning,” Rowan explained, “so I downloaded Duolingo and started learning it on my own so I could show off to her!” Their self-taught Spanish has served them well, as they are fluent reading and writing and feel prepared to begin the online coursework to become a certified interpreter.

Regarding the future, Rowan claims to be “nerv-cited; I’m really nervous but excited. I’m excited to get my life together and not be so dependent on other people. I’m excited to start being more me, but I’m also very nervous about that because there’s a lot of challenges that come with that.” With their dad’s No Thank You Bite rule – and what they learned from taking bites of life over the last few years – Rowan is prepared to face those challenges. “I think my biggest mistake was thinking I knew everything. When you’re 18, you think you know all there is to know, and then you get knocked down in a very hard way,” Rowan explained.

Today, they’re more aware of what they need to succeed and what their goals are. “I went into college with no knowledge of tech needs and rusty cane skills. I thought I could wing it, and it didn’t happen,” Rowan remembers. “I didn’t even advocate for myself with my family on what I needed.” Now, however, they’re more aware of what they want and need, and that begins with stability. “I’d like to see myself with a stable income and stable living situation, to be stable mentally, physically, emotionally,” they say. And that patience they learned at the School for the Blind has come in handy. “I’ve learned you don’t need to rush into anything, but at the same time to be prepared,” they say. And that begins, Rowan believes, with taking more bites of life. Whether they like the bite or not, they’ll be learning, growing, and becoming more “me.”