New ND Dual Sensory Project's Director looks forward to continuing to collaborate and partner with NDVS/SB to best serve students and families across the state.

The North Dakota Dual Sensory Project is in new hands, but they are capable ones. Lacey Long, who formerly worked for the Morton-Sioux Special Education Unit as a Teacher of Students with Visual Impairments (TSVI), took over the role of Project Director for the ND Dual Sensory Project this spring from Dr. Brent Askvig, who retired. In her new role, she will also serve as a Research Associate for the ND Center for Persons with Disabilities (NDCPD), which houses the ND Dual Sensory Project. “The last few years, I have worked on the [ND Dual Sensory] project, instructing some of the OHOA (“Open Hands, Open Access”) modules and helping to plan the state’s deaf-blind summer institute, so it felt like a natural fit for me to move into the Project Director role when Dr. Askvig retired,” Lacey explained.

Paul Olson, NDVS/SB Superintendent, agrees that Lacey is well-matched for this job and is looking forward to continuing to collaborate with the Dual Sensory Project to help support children who experience dual sensory loss and their families. “Lacey is passionate about every student she has served in her career,” Paul explained. “She has multiple teaching credentials and really is the most diversely trained educator I have ever had the pleasure to work with. Her knowledge and enthusiasm for working with and as part of a team is unmatched. Her positive attitude and work ethic is contagious.” We asked Lacey the following questions to find out more about her and how NDVS/SB and the ND Dual Sensory Project will partner under her leadership. 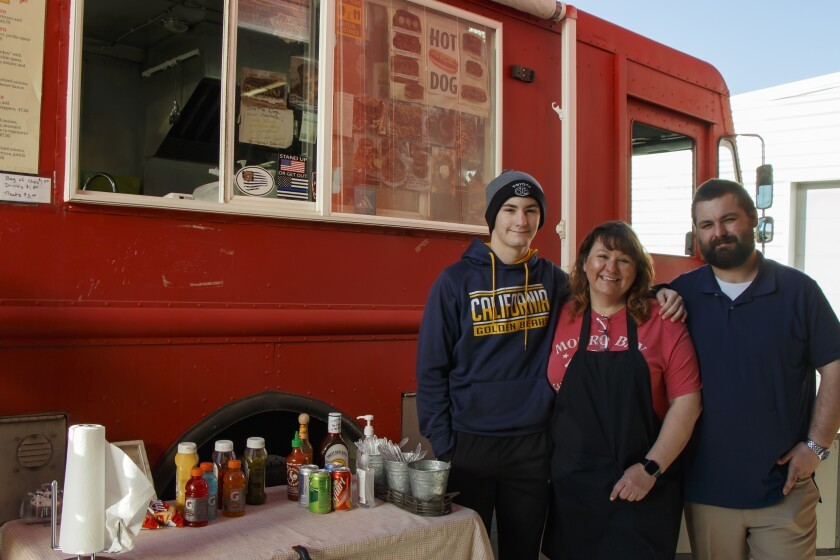 Not many Vision Outreach Specialists can list “Food Truck Owner” on their resume. But NDVS/SB’s newest employee, Kristina Brown, can. Two years ago, she and her two sons, Cameron (28) and Alec (17), opened the Dog Gone Good Food Truck in Dickinson, ND. “We served amazing food, including a specialty cheeseburger called the West Coast Burger, and strived to serve food that just wasn’t available in Dickinson at that time. And we succeeded!” Kristina says. But the food truck was more of a family project than a business venture, so when she was given the opportunity to get back into the vision world and work at NDVS/SB, she put down the burgers and went back to braille.

Kristina, who grew up in California but moved to North Dakota for a job with Vocational Rehabilitation ten years ago, is motivated by what her colleagues in the vision world do, and how they – and she – can help clients live a more independent life. “It’s the overall growth that rewards me. I believe my job is to work myself out of a job with individuals, so they don’t need me anymore. That is truly fulfilling to me,” she says.

Feeling Her Way to Success

We periodically share a young adult’s story of success. In this profile, Morgan Vanwell shares her journey after losing her vision at 19, just as she was deciding which path to take after high school. While her vision loss may have set her on a different track than she expected, she is grateful for all that has happened, and is excitedly looking ahead to the future, with binoculars at the ready. 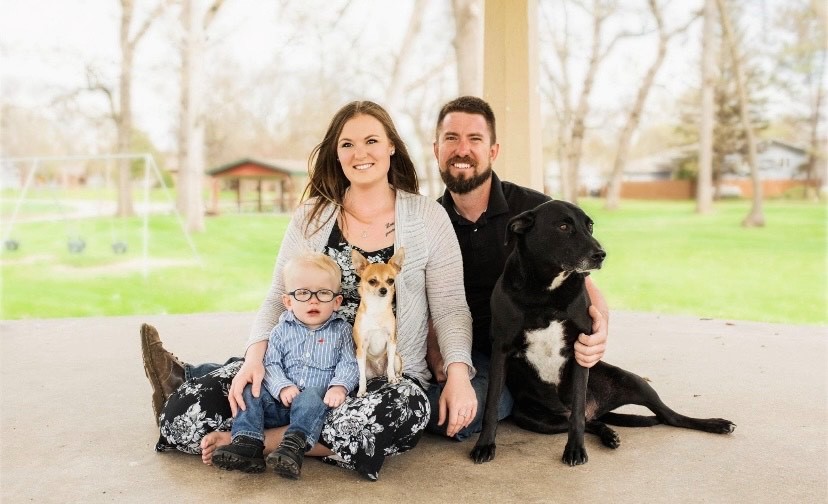 Jack Meagher, who was a pioneer in the field of sports massage, once said that “massage is the study of anatomy in braille.” Morgan Vanwell agrees with Meagher’s statement, because like all massage therapists, Morgan relies on her sense of touch to find the places in her clients’ bodies that are adhered, or knotted up, and to help them relax and recover from injury or overexertion. But, as someone with a visual impairment, Morgan’s trust in her sense of touch may be greater than other massage therapists’. 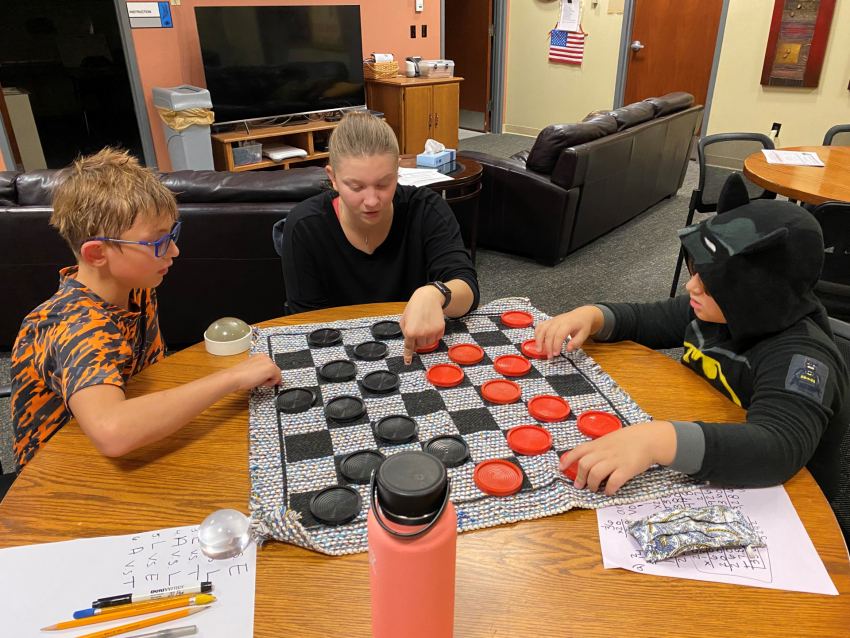 There are many hidden heroes at North Dakota Vision Services/School for the Blind. The hard work of maintenance staff and administrative assistants often go unnoticed. The person who produces braille and large print materials is often taken for granted. And houseparents – who are frequently declared “favorites” by students and clients – also fall into this category.

For 4 years, Amy Follette has been a friend to dozens of students and adult clients who have come to the School for short-term programs. You could say it’s in her blood. Her mother is a TSVI in Minnesota and encouraged her to apply for a houseparent position when she started attending UND. “Honestly, I really needed a job,” Amy said, “but I stayed because I fell in love with the School, the staff, their mission, and most of all the students and clients.” This spring will be Amy’s last with NDVS/SB, but before she moves on, we asked her to share what she’s learned from her time here. Keep reading because she’s got some trivia to share!

A Different Way to Read: Something to Try Over the Summer!

Something new that Bookshare has launched for Individual Memberships is the ability to read their books via an Alexa-enabled device. Using an Alexa skill called Bookshare Reader, a reader can link their Bookshare library account, list books on their Alexa Reading list, and listen to books read aloud via their Alexa device. They can stop a book while reading, save their reading spot to pick up where they left off later, and adjust the reading speed. 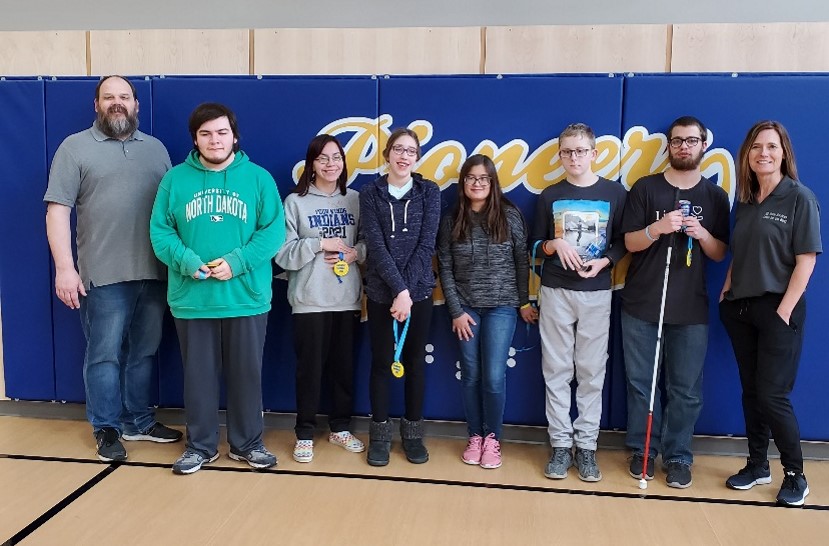 As the end of the 2021-22 school year draws to a close, I reflect on how wonderful it has been to have our students attend student programs in-person! We’ve had our usual student programs occurring on-site and had additional learning and social events occurring off-site as well.

I am excited to share that a diverse group of leaders in North Dakota have agreed to serve on a council to provide valuable input and help guide NDVS/SB in our effort to be continually improving. The Guide Council will meet via video conference several times a year to discuss and provide thoughts on the bigger issues we face as an organization. Any comments and suggestions will be brought back to our Staff Council and Visions Team for consideration to help us in policy development, or even the smallest changes to make on how we can serve children and adults better. 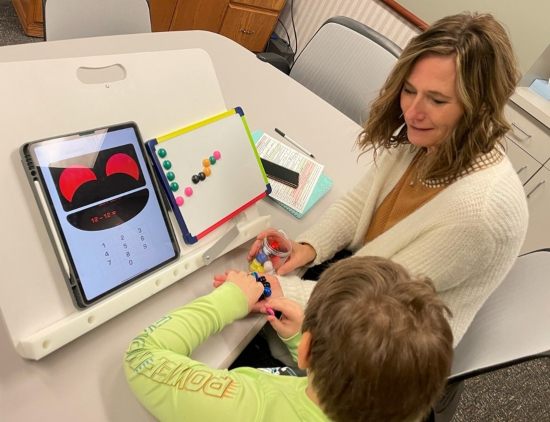 When Cindy Williams is asked how she became the Coordinator of Student Programs at NDVS/SB, she claims, “the stars aligned.” And like the stars in the sky, her path was not straight. While she knew from a young age that she wanted to be a teacher, she attended a business college after high school. She ended up in Grand Forks after her husband accepted a position here and found a job as secretary at NDVS/SB. “After working for a little over a year and seeing what the teachers’ roles were, I decided I had to pursue my dream and educational degree. That was my first step,” she says.

While attending UND for her elementary education degree, she continued working at NDVS/SB as a houseparent. Then, she became the Evening Activities Coordinator, a position that oversees the houseparents and plans recreational activities for the students attending in-house programs. As she neared the completion of her master’s degree as a Teacher of the Visually Impaired, she was hired as the Outreach Teacher serving the Devils Lake region. A few years later, the Outreach Teacher position serving the Grand Forks region opened up, and she was able to work closer to home. Since 2018, Cindy has been the Coordinator of Student Programs. “Looking back on my career thus far, I am thankful for every position I have held as I have learned so much, and each one has contributed knowledge and experience which I use in my current role,” Cindy says. Read on to learn more about how her knowledge and experiences have turned into opportunities for the students she serves. 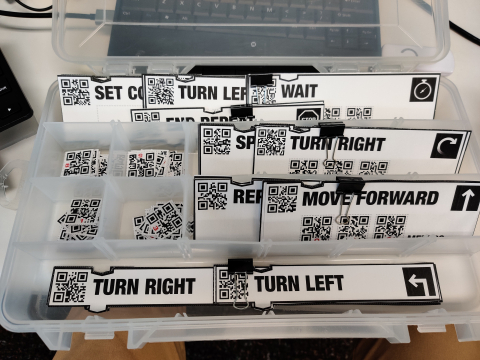 Perkins worked with Sphero and SAS to make ‘CodeSnaps’ an app that is for visually impaired and blind learners that use the camera to scan QR-Codes to build out a program.

CodeSnaps empowers educators across the country to learn how they can implement computer science education for students with visual impairments with Sphero BOLT and SAS® CodeSnaps braille blocks.

Individuals with a visual impairment share their experiences looking for and maintaining employment in a world that often discriminates against them and is uneducated about their needs and abilities.

When Lexee Steffen graduated from Dickinson State University in 2015 with a bachelor’s degree in Spanish, she felt prepared for the real world and an independent life. “I had a degree and learned a lot during classes and felt I had plenty of experience working with a variety of people and advocating for my needs,” Lexee says, reflecting on her optimism post-college graduation. “I thought I would work in my hometown for a year or two to get my feet wet in the workforce and then move to a bigger city to work using my Spanish skills as an interpreter or in a bilingual setting and possibly get my masters,” she continues. Unfortunately, things haven’t worked out as she planned. She has kept busy with part-time work and volunteering, which has helped her maintain her computer skills and allowed her to gain experience in different work settings. But she has yet to find full-time consistent employment. “I think employers sometimes see us as a liability,” Lexee says. “I think they are worried about things going wrong because of us or that something might happen in the workplace that is discriminatory and that we would use that against the company.”

The “us” Lexee is referring to are individuals like herself who have a visual impairment or are blind. Lexee, who has Retinopathy of Prematurity (ROP), is not alone in her inability to find full-time employment. According to research by the American Foundation for the Blind (AFB), only 44% of people who are blind or visually impaired are employed. And those who are employed are often underemployed, meaning they work part time or only part of the year (Disability Employment Research: Key Takeaways, 2020). With assistive technology available to level the playing field and public schools and colleges and universities being held to the standards set forth by the ADA, the fact that more than half the blind and visually impaired population is unemployed is surprising and disappointing. But there are other factors at play that affect individuals’ rights and opportunities, and, ultimately, their employment.